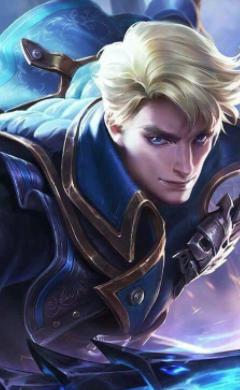 MLBB Meta as of November

by damaged-ap
The new tier list follows after the introduction of Benedetta. The new laning system ...

MLBB Brawl Meta as of November

by damaged-ap
The new tier list follows after the introduction of Benedetta. Each hero is assessed ...

by JimmyXgun101
Here's my Tier List for Mobile Legends Bang Bang. These are my personal opinion based...

3
Active
Alucard increases his Physical Lifesteal by 20% and locks onto an enemy. Meanwhile, his Lifesteal Effect increases by 100%. Lasts 8s. During the time, he can fire a powerful attack wave forward, dealing 440 (+220% Total Physical ATK) points of Physical Damage to enemies.

Passive
Passive
If Alucard's skill hits only 1 enemy, it deals 1.2 damage. If it hits 2 enemies, it deals 1.1 damage. Alucard's next Basic Attack after using any skill deals 1.2x damge and takes him to his target.

Alucard is a very strong hero, when he is sufficiently farmed, especially when he is ahead in farm. He is able to burst down the squishy enemy heroes within mere seconds and yet still have the ability to continue fighting in fights with the low cooldown of his skills, bringing the team to victory if played right.

In this guide, I will take you through the steps to unleashing the Beast within Alucard and make full use of his utility to shred the enemy within mere seconds.

When just a child, both of Alucard’s parents were killed by demons and he was imprisoned and suffered cruelties at their hands for several months, until finally he was rescued by demon hunters and raised by them. From a young age, he was raised to be an outstanding demon hunter, with an extreme enmity for the demon race. The three iron laws of the demon hunters are: Swear no allegiance to any army. Spare not a single one of demonkind. Never stop carrying out missions.

This passive helps Alucard solve the problem of being kited by ranged heroes. This skill makes chasing enemies much easier, and doing way more damage in a 1v1 situation. Heck, even in a 1v2 situation it’s hard to kill a well-farmed Alucard.

Leaps forward and launches 1 strike. Deals 240 pts of physical damage to the enemy and slows them down.

Your main gap-closing ability. You CAN jump through walls with this ability, so make sure you make full use of it.

Slashes at enemies in the area, dealing 230 pts of physical damage.

Your main damaging skill. This skill also has a very low cooldown so make sure you use it often in a fight. It is an AoE skill so you will lifesteal a lot of health in team fights.

Raises the hero’s physical lifesteal 20% and also locks onto enemy, dealing extra damage with any attacks on the target and raising lifesteal 100% for 8s. While the skill lasts, the hero can fire powerful attack waves forward, dealing 440 pts of physical damage to enemies.

The main reason why Alucard excels in fights, and seems so unkillable in 1v1 fights. The lifesteal you get from using this skill is insane, and you will be able to sustain long in the fights.

Max Whirling Smash then Groundsplitter, and get Fission Wave whenever possible.

Disclaimer: Alucard is a farm dependent hero, so please get a Hunter’s Knife with your first 300 gold.

Build 1: This build is for bursting enemies down quickly, and especially when you have an advantage in gold.

Lifesteal is always good. Helps you sustain in fights.

You’ll be jumping into fights, so you’ll need a bit of armor. As compared to Swift Boots,                    you don’t really need the extra attack speed since Alucard doesn’t rely a lot on attack speed

Get additional lifesteal whenever you use your skill. What’s there not to love? Also the added cooldown reduction helps you cast skills more often.

In the event you find yourself getting killed too often, give this item a go. Otherwise, get another damage item if you are WAAAAAY ahead of farm.

Build 2: This build is for the tougher games, where you find yourself not having enough farm and/or die often in fights. This will help still get damage albeit less, but survive longer.

Item build: (I will only highlight the differences)

This gives you more damage and lifesteal when your HP drops below 40%, so you can give your enemy false hope while they try to kill you.

You get more damage increase as you get attacked.

Purify if you find yourself facing up many teams with lots of CC’s. Just remember this tip: A stunned Alucard is a dead Alucard.

To farm faster. As I’ve said, Alucard is a farm dependent hero so getting this item speeds up your farm.

Get this if you find yourself being unable to finish off the enemy often.

If your team lacks an initiator and a tank, you might need to jump into fights first. Get this to survive longer and wreck havoc.

Extra damage and CC to the enemy.

Overall, I would recommend getting Retribution or Purify. Just take note that using a Battle Spell triggers Alucard’s passive ability, so you can utilise this to your advantage. Use a Battle Spell if you need to make the final leap to your target.

As with any other heroes just use the highest level (physical damage) emblem.

With Estes healing you, you’re even more unkillable. Plus Estes’s slow will aid you in catching up to enemies.

With a good Tigrel that can land 4-5 man ultimates, you’ll be able to burst down the enemy team quickly.

Nana has a very strong CC skillset, if you jump in on her before she casts her spells you’re basically dead lol

His ultimate and pushback skill combos can buy the enemy carry enough time to take you out quickly.

Getting silence by Natalia and you are unable to lifesteal as much, and being unable to hit anyone with your basic attacks in Natalia’s smoke.

You’re gonna have a bad time with 50% less lifesteal.

Before we continue, let’s discuss some of Alucard’s skill combos.

These are just samples of the many combos you can do with Alucard. Ideally to do the maximum amount of DPS, you want to use normal attack between casting spells.

Also, your Fission Wave does a lot of damage, you can use Fission wave when you see a large group of the enemy together.

Make use of that if you need the extra boost to reach the enemy.

Head for the Bot lane. Usually I like to kill the minions in the lane as fast as possible so that my wave will be pushed into the enemy’s turret and die without the enemy heroes nearby, denying them the experience.

When there are no enemy minions in lane, head to the jungle and kill 1 minion and then go back to lane to continue getting experience.

Do not be afraid to exchange blows with the enemy, you’ll most likely be doing way more damage.

If possible, get the Red Buff for Alucard. More damage = more lifesteal. If you have the Retribution Battle Spell, make sure you use it whenever possible to accelerate your farm.

Kill the turtle whenever possible too, Alucard is strong enough at level 4 to solo the Turtle.

By now you should have decent farm and deal lots of damage. However do not stop farming. Do not mindlessly wander in between lanes looking for a gank, but instead head to the lanes that have minions pushing to get a quick boost of gold.

In teamfights, you can initiate if you have enough gold lead. But just be wary of the CC heroes, if possible, try to bait or wait out for them to use their CC skills on someone else first, then jump in onto the team.

If your team initiates on them, just follow up with your combos and quickly take out 1 or 2 of the enemies.

1 tactic you can employ is to position yourself to disrupt the backlines. When the fight breaks out, go ahead and jump in from the sides to take separate the tank from the damage dealers, creating space for your team to take out the isolated tank and maybe 1 more hero.

Ideally there isn’t really going to be a late game for Alucard. He kind of falls off late game.

Anyway, you should be full geared towards the end of the game. Don’t worry if you’re not. Play the same as Mid Game, but take note that you’ll be more squishy now since everyone is farmed up.

When defending pushes be careful of the enemy’s surprise ganks as Alucard’s escaping ability is weak. Stay with your team as much as possible.

If you have enough gold at the end of the game, you can consider sellings your Warrior Boots and buying another damage item, probably Berserker’s Fury or Hunter Strike to get the extra movement speed.

Also, please buy potions when you’re overflowing with gold. Buy the Energy Potion(Red Attack Potion), and consider buying the Rock Potion (Yellow Defense Potion) if you die too much.

Alucard doesn’t really do that great in the late game, so if you are able to end the game quickly, please do. He shreds marksmen, supports and mages very easily and make sure you are aggressive when playing him.

Also, be cautious when fighting teams with strong CC. Do not initiate into enemies who have CC skills up. It’s suicide.

Remember: A stunned Alucard is a dead Alucard.